With both Union and Confederate veterans in the audience, Mrs. Powell said in her dedication speech, ". . . I rejoice to think that we are here assembled together and have the pleasure of being present with those whom this country has learned to appreciate and in who honor we have given this day."
She went on to praise the Union veterans for their contribution to the nation when she said, ". . . that the members of the organization whom I this day represent have learned to love with all sincereity those [Union veterans] who have served this country and have been instrumental in the emancipation of the United States.
"As I look about me and see those who are gathering the robe of age about them and whom served as guardians of this nation, I thank God that we are gifted with an age of civilization which gives us a leader at Washington (President Wilson) who declares the principles of civil and religious liberty and keeps sweet on earth the savor of piety and patriotism that we will have no more wars of brute force between men, but will dwell in harmony under one flag as a peaceful nation."
Pulling the cord to unveil the monument was Miss Dorothy Mitchell. The school children there sang the song "Dixie" on the front steps of the courthouse and some young ladies wore a badge for each state of the Confederacy. Confederate and American flags decorated the front porch of the courthouse for the event.
The United Daughters of the Confederacy gave a reception following the unveiling.The evening after the ladies  entertained their friends with a dance at the Elks home.


The monument has survived a number of storms over the years. In 1918 it was knocked off its pedestal by a hurricane on August 6. It was reported that the statue, when struck by the hurricane force winds, was knocked off, did a flip in the air and landed on its feet. A photograph taken at the time of the bronze soldier standing on the ground next to the monument, gives credence to the story.
In 1945, it was noticed the monument was leaning over, so it was taken down, repaired and remounted. Then 50 years later, January 13, 1995, a wind storm nearly toppled the statue on top of the monument, which was leaning over sideways. The state was taken down and it was found that the repair done in 1945, a galvanized pipe threaded into the inner copper foundation, was rusted out.

The Calcasieu Parish Police Jury hired local sculptor Tim Winterbottom to repair and restore the statue. He replaced the foundation and provided more support for the statue. Winterbottom said at the time, "The soldier's boots were completely separated at the seams around the upper toe, tongue, and down the back of the heels. The heels and the ankles were both crushed. The triangular point on the top of the flag staff was also broken off."
The sculptor reshaped with pressure clamps the toes, tongue, ankle and heels so it wouldn't be necessary to apply heat to the most damaged area. Winterbottom noted at the time a heat block and soaked towels were wrapped around both ankles when heat was applied to that area. "Strategic strength points were 'silver soldered' to provide strength and vertical support. Cosmetic work was accomplished with regular solder and finished with grinders and buffers.
"A final patina was added to restore its greenish black surface," he said. The inner foundation, or armature, was completely redesigned and rebuilt using stainless steel and brass. Winterbottom noted the foundation base is made of stainless steel with neoprene gaskets between the stainless steel armature and the copper base to prevent any electrolysis.
The sculptor said the statue was a finely crafted piece of sculpture. He said the technique uysed to craft it in 1915 involved shaping sheets of copper by hammering them into wooden molds. The separate pieces were then soldered together to create the finished sculpture.
Parish workers replaced old rusty iron support rods on the marble pedestal base with new, stronger brass rods.
While the restoration was going on, a political candidate attempted to have the police jury remove the state from the courthouse grounds. The police jury rejected the request, but added a separate marker behind the monument to explain the context of the work of art. Both Union and Confederate veterans took part in the 1915 ceremony emphasizing healing and reconciliation between North and South.
The statue was remounted on the pedestal and on June 3, 1995, the 80th anniversary of the original dedication, the monument was rededicated before a large crowd of well-wishers. There was a small, peaceful, demonstration by opponents of the historic landmark. 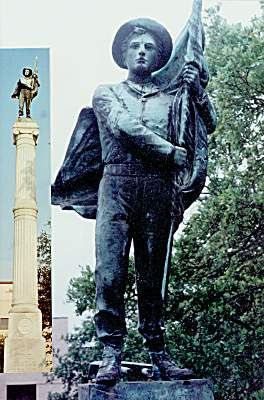